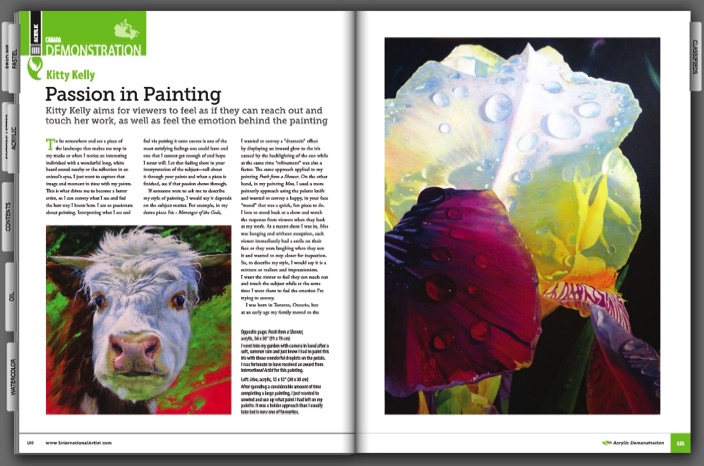 Kitty paints because it makes her happy - it is her passion.

Born in Toronto, Ontario, Kitty has lived in Australia, British Columbia, P.E.I. and now resides in Brockville, Ontario.  She is an elected member of the Society of Canadian Artists - SCA as well as an acting juror for the society, a signature member of Artists For Conservation - AFC, as well as a member in several local associations.  Kitty donates her artwork to charitable organizations to help raise funds toward their causes i.e. Ontario Society for the Prevention of Cruelty to Animals; Canadian Diabetes Society; Play for Children; Brockville General Hospital. She is a supporting member of Ducks Unlimited - Canada, as well as Animal Alliance of Canada.

Self-taught, she paints in a realist style using acrylics.  Having grown up in the country, her artwork reflects an ongoing love affair with nature.  Kitty wants the viewer to feel they could step into the painting to be there.  When she notices a smile on their face as they are looking at the painting, then she has achieved her goal.

Her love of wildlife has taken her to workshops from Ontario to Wyoming, Montana as well as British Columbia.  These workshops were given by such artists as Michael Dumas, Terry Issac, David Kitler, Greg Beecham and Robert Bateman.

Kitty’s artwork has been published in International Artist Magazine over the past five years as a result of being in the winners’ circle of their worldwide competitions.  The same holds true for North Light Books - Acrylic Works 3,4,5,6 and 7.

Many of her paintings hang in corporate offices and in the homes of private collectors in Canada, U.S.A, Europe and Australia.  Kitty was the recipient of the People's Choice Award at Perivale Gallery's "In the Spirit of Tom Thomson & The Group of Seven Show" for her painting of "First Light".